You can not control what you do not measure! 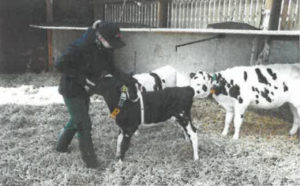 You can not control what you do not measure!

The wise statement of Peter Drucker’s management guru (1909-2005) – “You can not control what you do not measure!” – You can apply to all spheres of economic activity, as well as to agriculture. But very often decisions are based on human instinct.

This also applies to the raising of calves: the goal of getting a daily gain of live weight from 800-1000 g is taken by many farmers and often harassed. Now we are aware that calves, which grow faster due to intensive cultivation, will produce more milk in the future. This effect is called metabolic programming.
But it is impossible to accurately determine the body weight of calves without regular weighing. Less than 12% of farms weigh calves during the milk phase. And only 9% of farms weigh calves at least twice. This means that 91% of the farms do not determine the daily increase in the body weight of calves and thus do not have information on the individual productivity of calves. How do these households intend to make important decisions about the feeding or selection of animals?
In this article you will learn more about different methods of determining body weight and their benefits for the successful cultivation of calves.
There are three main ways to determine the body weight of calves:
– Measuring tapes.
– Mechanical or electronic scales for animals.
– Built-in weights at the feeding station for calves. 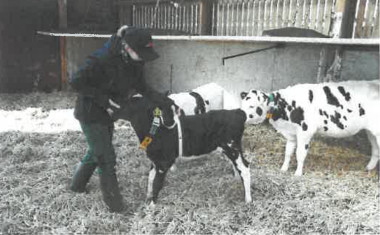 The simplest and cheapest method for determining the body weight of animals is the use of measuring tapes that measure the animal’s circumference. Weights can be calculated and fixed. It should be borne in mind that weight is only approximate. But if the calves are repeatedly measured using a measuring tape, the estimated increase is, of course, informative.
It is important to measure several times during the milk phase (at birth, after 4, 8 and 12 weeks). This is the only way to get a complete understanding of the development of the calf.

Mechanical or electronic scales for animals

Mechanical or electronic scales for animals more accurately fix the weight of the body. In this case, too, it is necessary to weigh several calves during growing. As with the measuring tape, metrics are recorded and compared.
Newer electronic scales for animals can be equipped with RFID antennas that record the body weight and then store it automatically for the appropriate calf. Data can be exported and then processed.
The data is much more convenient and more informative if it is automatically transmitted to the management software. This makes the weighing operation much easier for the staff. On the market there are already systems that allow you to enter additional information during weighing.
When the weight of the body at birth, the information on the process of calving, colonization, etc., is introduced directly to the animal terminal.
Thus, important information is stored, which can later be supplemented in the software with other information for holistic analysis.

Built-in weights at the calf feeding station provide the most complete information on the body weight of calves. During each visit, the body weight of calves is recorded and data is generated that provides daily information on the development of calves.
Since calves suffering from diarrhea instantly lose weight, even if they are still drinking milk very well, it is possible to identify these calves more quickly by means of an alarm list of weight than the alarming list for milk consumption. Also, severe diarrhea can be avoided due to early treatment, reducing drug use.
Equipment for feed calves weights, gives the opportunity to wean calves based on the individual development of body weight. With this method, calves that consume more concentrate at an early stage are gaining weight faster and may be detached from milk before. This saves the cost of milk or whole milk substitutes and promotes the further transformation of calves into ruminants.
In addition, animal scales, combined with management programs and analysis software, provide very detailed information on the future effectiveness of calves in their evaluation. Various studies on the subject of metabolic programming indicate that calves with high feed intake and high daily average increments later also have higher lactation productivity.
Thus, it is researched that 85-111 kg more milk is produced in the future during lactation for every 100 g increase in average daily gain of body weight. So, if calves grow at 1000 g instead of 600 g per day, you can expect 450 kg more milk during the first lactation.
Thus, as an extension to the calf’s genetic parameters, animal weight information provides additional important information on the following question: which calves will remain on the farm for cultivation, and which ones will be sold?
In particular, in cases where resources are retained or there are territorial restrictions, the question often is whether animal welfare needs to be grown? Then these additional selection options become more and more important.

It is also important to understand how the calves grew. In Figures 1 and 2 you can see the feeding trajectory and the weight of the body of two calves.

Calves ate the same food and almost always the full amount. But it is obvious that in the first calf weight of the body is only 75 kg at the end of cultivation, while the second calf ends the milk phase with a body weight of approximately 90 kg.
The first calf almost did not grow up to 20 days, while the second calf steadily increased at a rate of about 900 g per day.
The first 3-4 weeks in the life of heifers are crucial for metabolic programming and development of the udder in the early stages. Thus, the second calf takes precedence over the first choice for the future dairy herd.
These data show that Peter Drucker’s quote is more relevant than ever. It is difficult to make the right managerial decision based solely on human instinct. When raising calves, you need to collect a lot of information to set the right course on the farm. “Tele is the future of the farm,” says every second post on this topic. Let’s finally begin to act accordingly!